Founded in 1766, Rutgers is among the nation's oldest institutions of higher learning. It is the state’s most comprehensive intellectual resource—the flagship campus of Rutgers. The university is the region’s most high-profile public research institution and a leading national research center with a global impact.

Rutgers has good reason to be proud—a long and illustrious history, a vibrant academic environment, exciting research programs, and a tradition of service to New Jersey and the nation. Vibrant and diverse with 65,000 students, 24,000 faculty and staff, Rutgers has 34 undergraduate, graduate, professional schools and 200 research centers. 175 academic departments offer over 270 bachelor’s, master’s, doctoral and professional programs.

Rutgers University–New Brunswick ranks among the top public research universities in the United States. It is the only public university in New Jersey to be invited to join the Association of American Universities, an organization comprising the 62 leading universities in North America.

Among its many graduate offerings, Rutgers has a highly ranked Graduate School of Education. The university awards one of the highest numbers of doctorate degrees a year among U.S. schools.

As a public research university, Rutgers is home to unique institutions such as the Center for Advanced Infrastructure and Transportation and the New Jersey Agricultural Experiment Station, where students take hands-on courses in the sciences and work on community projects. 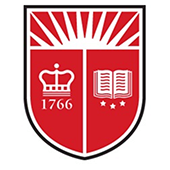 With excellent air, rail, bus, and highway connections to all points, our prime location attracts talented scholars and students seeking access to world-class everything.