University of Rochester is a private institution that was founded in 1850. The university grants undergraduate and graduate degrees, including doctoral and professional degrees. The university has six schools and various interdisciplinary programs.

The University of Rochester is particularly noted for its Eastman School of Music. The university is also home to the Institute of Optics, founded in 1929, the first educational program in the US devoted exclusively to optics.

The University of Rochester’s graduate programs include the highly ranked William E. Simon Graduate School of Business Administration, Hajim School of Engineering and Applied Sciences, Medical Center, Department of Political Science and Department of Economics. The well-regarded Eastman School of Music is home to more than 20 ensembles, including the first wind ensemble in the country.

Admission into the University of Rochester has become increasingly competitive, with an average acceptance rate of 34% for the fall of 2015. Washington Monthly ranks UR 33rd among national universities by U.S. News & World Report.

The curriculum at the University of Rochester is what really makes it special. There are no general education requirements. The only required course for all majors is a writing class, which is offered in many subject areas to allow you to explore a subject different to your major, or enhance your interest in your current major. The most popular specializations are Health Professions (16%), Social Sciences (16%), Biology (13%), and Engineering (13%). 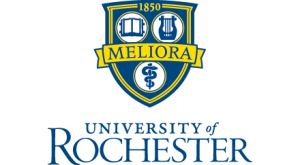 The University of Rochester's campus was originally in downtown Rochester at the United States Hotel, which was located on Buffalo Street near Elizabeth Street, which today is West Main Street near the I-490 overpass. In 1853, the campus moved east to a then-suburban location on what is now University Avenue.